I hiked and camped at Riding Mountain National Park a few weeks ago with a group. Like all trips to the park for me, Whitehouse bakery was our first stop and group meeting spot. The maple cinnamon buns and cream cheese cinnamon buns were just as I expected. Warm, gooey, and the perfect late morning snack. There is a very good reason why there are line ups throughout the day at Whitehouse Bakery.

Blue Jay and I, along with friends hiked to Minnedosa River campground, a short and simple 4 km hike part of a larger loop of trails and campsites in the central / west section of the park.

Riding Mountain is in the midst of updating their topographic maps for the west side of the park so we did not have access to detailed maps, only a “touristy” map. I went to MEC a few days prior to leaving for this trip and had the intention of picking up a detailed map but only the east side was available.

Again, we only had a “tourist” map and not a detailed one of the roads so we had to ask for directions from a couple in the parking lot. It was an extra 10 minute drive to the trail head. 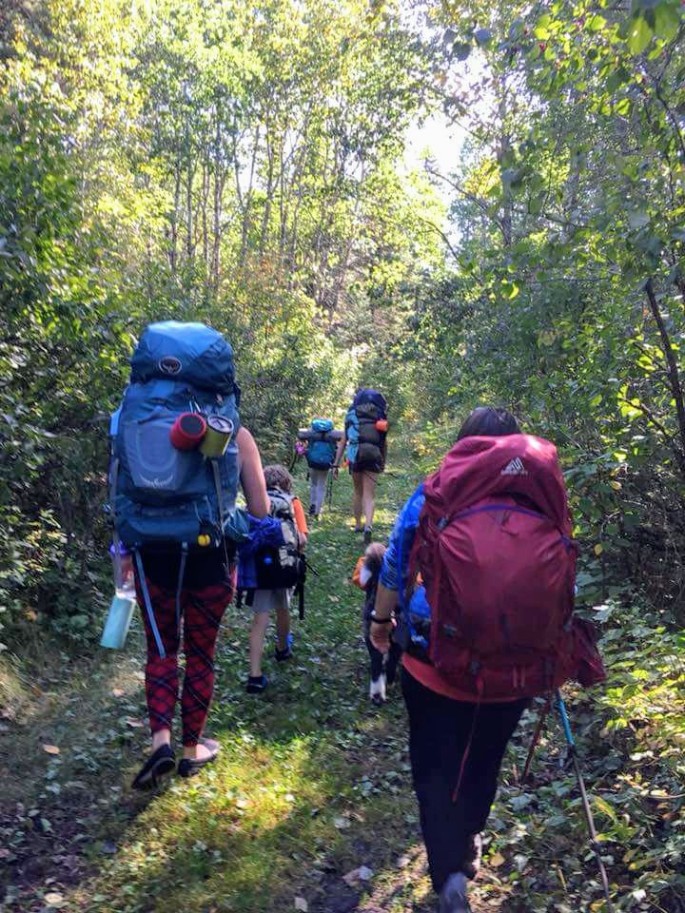 You may remember that Asha and I have slowly been getting back onto the trail together after our incident with an off-leash dog last winter. Darcy bought Asha a backpack, The Ruffwear Approach™ Pack in an effort to encourage her and I to spend more time together on the trail. We chose the orange colour over green for visibility when we hike during hunting season.

Asha is not overly keen on wearing the pack but with some encouragement (and pulling) she begrudgingly followed. She has worn it at home and during family walks and I still don’t think she overly likes it but is tolerating it. She refused to listen to me this morning after wearing it last night so I think she is mad at me.

Blue Jay also has a brand new pack, the Deuter Fox 30. She earned it by being incredibly awesome on our Mantario day hike from the south trail head. The south portion is one of the most challenging portions of terrain of the entire route.

She is a petite child and most youth hiking pack frames are too big on her, including the one we chose. It is the smallest frame size for the liters that we wanted. There is room to grow and the pack should last her for a handful of years. The backpack is a confidence booster for her. She feels like a real hiker like her mamma and isn’t getting second best compared to me. We have big plans for that backpack, including an overnight on Mantario this fall, weather permitting. 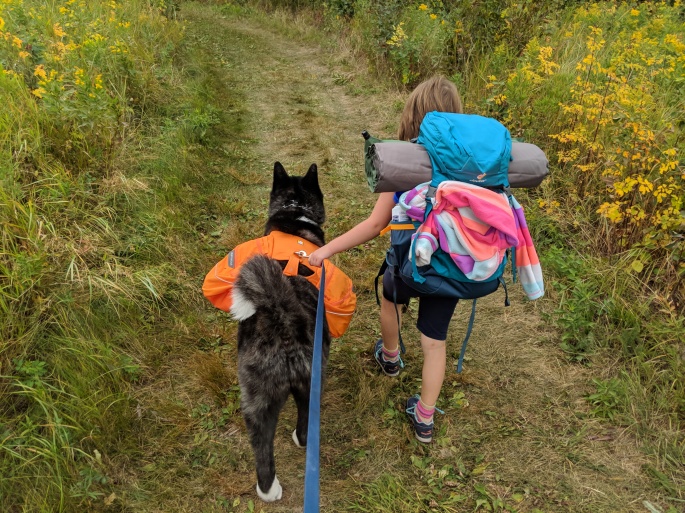 We explored further up the trail for about an hour and a half after setting up camp. We broke off into individual groups for some rest and relaxation when we returned to camp. I dozed off in my tent while Blue Jay laid beside me watching a show on my phone.

I awoke when Asha barked to let us know that someone came into camp. She is such a good girl. Loyal, protective, and only barks if there is a reason. The person coming into camp was my friend and her son returning from a hammock spot on the other side of the camp site where people hitch horses. There were not good hammock trees right in camp, otherwise I too would have strung my hammock up.

We settled into make dinner and rain came off and on. We took cover under the firewood shelter. I had no desire to bring a wet dog into the tent so I am thankful we were able to huddle up under the shelter. The rain did not last long. 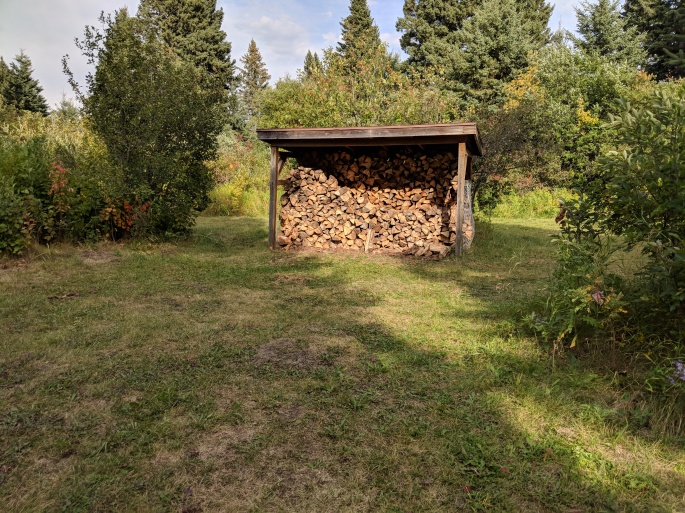 The evening and night turned out to be cold. I packed warm fleece pajamas for my daughter and shorts and a tank top for myself. I usually run quite warm and my sleeping bag is rated to 0. I have rarely been cold while camping, even in late fall and early spring temperatures.

I prefer cooler weather to hot weather. I ended up putting all of my clothes on that I brought with me, including my rain jacket and Buff. I slept solid from 11 PM to 3 AM after layering up. When I woke up I was sweating. I removed layers down to my tank top and shorts just as I had originally planned. Overnight tempatures sure couldn’t make up their mind!

During the late part of the evening, two men arrived and set up camp. We exchanged simple and polite hellos and kept to ourselves. We reminded our children to walk around their site and not directly through it when going to the pit-toilet. As polite as we were, they were careless jackasses to us in the morning. They left their fire going, flames and all when they left.

Did they think that because we were a group of woman and children that we would be sticking around long enough to see it go down? Or are they just irresponsible?

The kids filled up cups of water from the near by creek to help extinguish the fire. We hung around for an extra half hour during the whole process to ensure the fire was out. We were not impressed that we had to tend to their fire in addition to ours to ensure they were both out. I suppose the silver lining is the situation presented a good learning opportunity for the kids.

My friends returned home to Winnipeg the morning that we came off the trail and I decided to spend another night at Riding Mountain before going home.

Blue Jay, Asha, and I got a camp site in Wasagaming and then headed to Ominnik boardwalk just on the edge of town. I was not sure how Asha would do walking on a boardwalk based on how she has reacted to crossing swinging bridges in the past. The boardwalk didn’t seem to phase her and we enjoyed an hour walk before dinner. 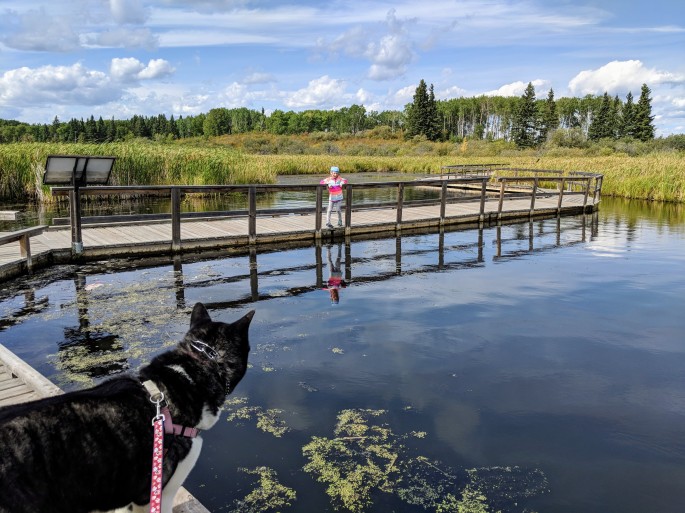 We picked up dinner in Wasagaming at a small diner and took it back to our campsite. We spent the rest of the evening lounging around, playing games, and reading.

Wasagaming is a large and loud campsite and unfortunately noise went on well into the wee-hours of the morning. Our neighbours blasted classic rock music. Thankfully it was not an intolerable music genre. They also had a bright light hanging in their campsite that illuminated my tent that was annoying.

I didn’t bother saying anything because Blue Jay fell asleep without issues and I knew I would eventually fall asleep too. Asha grumbled. I don’t think she liked the noise or light harshing her mellow.

Before heading home, we hiked Lake Kinosao and Brule Trails. My husband proposed to me on the shores of Lake Kinosao so I love to visit every time I am in Riding Mountain. We have hiked with Blue Jay a number of times on the trail too. She thinks it is the greatest thing being able to go where daddy proposed to mommy.

She held my hand for almost the entire time we were on the trail. It made the hike to Lake Kinosao that much more special for me.

Riding Mountain National Park is a very special place for me. I spent time there as a child and I like that I am making new memories with my family. I adore Wasagaming, the little town that has everything that someone could need for rest and relaxation. I love exploring the backcountry trails and I love that a piece of my heart is forever on the shores of Lake Kinosao. My home away from home.